I probably met Art Widner sometime in the '80s. I'm not sure exactly when. It quickly came to seem he'd always been there, but if he retired from teaching at 65, that would have been in 1982, so my best guess is that it would've been sometime after that, although it appears that he started getting active in fandom again (after 30 years away) in 1979, which is when I went to my first convention, so maybe he really was always there. I don't think I ever asked him why he came to so many Pacific Northwest conventions, but I saw him at Norwescons (when I still went to those), Orycons, Westercons, Potlatches, Corflus, and I don't know what else up here. Maybe V-Con too, although I myself only went to a couple of those. He was always around, always ready to chat over a cigarette and a drink. I'm pretty sure that when I first met him I wasn't aware that he'd been a Big Name Fan in the '40s, and for example had been at the very first Worldcon in 1939. I wasn't much interested in fanhistory in those days, so Art's fannish past was not something that came up a lot with me. I liked hanging out with him because he was fun to talk to and because he enjoyed having a good time. 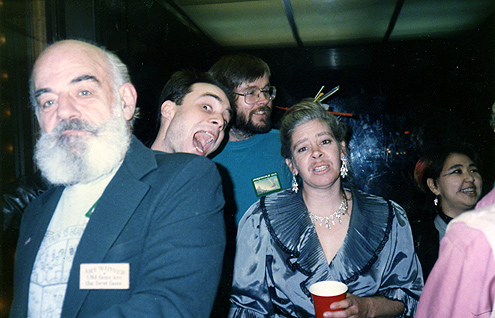 Photo by Lucy Huntzinger, who thinks it might be from the 1986 Norwescon:

So what I remember from the earliest days of hanging out with Art at conventions was drinking and smoking with him. One of my favorite moments came at what I think was an Orycon in the '90s sometime, although it honestly could have been any of the larger conventions I saw him at, when he sneaked out the side door of the hotel to have a cigarette with me and Tami. His doctor had advised him to stop smoking, and I believe he'd quit smoking in his day-to-day life but still liked to have one or two when he was drinking at a convention. So he bummed a cigarette off one of us, and we were smoking and yakking away when suddenly the door flew open. There stood Art's girlfriend of the time, whose name I think was Sheila. When she saw what he was doing, she put her hands on her hips and glared at him. "Busted!" Tami and I cried, as Art looked chagrined. Then Sheila busted out laughing, and so did Art. How can you be mad at a naughty boy who's 80 years old?

Art was always a great story teller, and as I say he didn't talk to me much about his early days in fandom. What I remember were stories about his trip to Russia with a group that included the science fiction writer Joe Haldeman (although I've always remembered it as Roger Zelazny, for some reason), and I especially remember him telling me that the Russians could drink you under the table if you didn't watch out, so when they got into a heavy drinking session he'd dump his vodka into the nearest planter when no one was looking. He also talked about his trips to Australia, where I believe he'd traveled even before he won the Down Under Fan Fund in 1991. I'm pretty sure he'd gone to the 1985 Worldcon in Australia. There were other travel tales too, because he loved to travel. This was long before I learned that he had been known as a travelin' jiant in his younger years, when he used to hitch hike to visit far off fans or when he drove the Skylark of WooWoo (a 1928 Dodge) to the Chicago Worldcon in 1940 and the FooFoo Special to Denver in 1941. 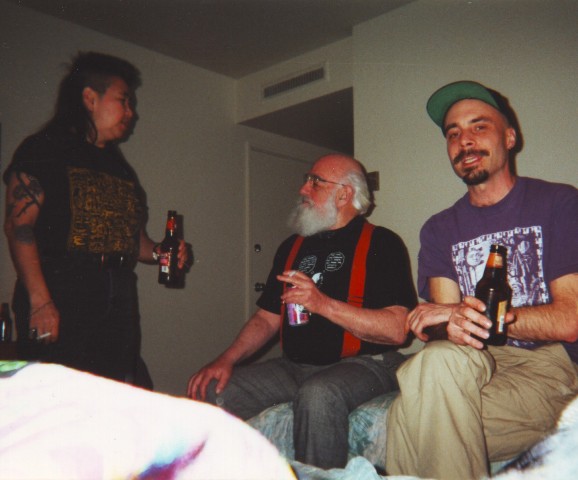 At the 2000 Potlatch with Tamara Vining, Art, and myself (Unknown photographer)

Eventually I got sucked into fanzine fandom myself, and thereby received more education in fanhistory, including Art's history. He and I shared a room at the 2006 Worldcon in LA, and every night when we came back to the room in the wee hours, Art would pour us both a shot of Aberlour and tell me stories about the old days. What I particularly remember from those chats was his stories about F. Towner Laney, who was a pugnacious Insurgent fan writer in the '40s and more than a bit of a homophobe. Art told me that Laney was insecure in his own sexuality, which did not come as any surprise at all, considering the strong link between homophobia and sexual insecurity. I can't remember now whether it was in those sessions or a later one when Art came up for one of his many visits to the Art Car Blowout at the Fremont Street Fair that he told me about a period in the '40s after he and his family had moved to LA when he was still trying to hang out with Burbee, Laney, Perdue and the other LA Insurgents. As I recall, Art said he'd go over to Burbee's house to play poker, but it didn't sit well with his wife. Did he tell me that he was essentially sneaking out behind her back? Perhaps Art was a naughty boy even then.

If he told me much about his wife, I don't remember it. Another powerful memory I have of Art was at the Potlatch in Eugene when he told a table of us about one of his sons who had disappeared from his life years ago. If I recall correctly, he had two sons, and one of them had already died by that time. Art cried as he told us about the missing son. Eventually he learned that that son had died as well, but I don't remember if there was any contact between them before then. Did he have a daughter too? Maybe so, but he outlived all his kids. I met two of his grand daughters, both of whom lived in this area for a while, although one eventually moved to Sydney with her husband. Art visited them there fairly frequently, and for all his sadness about his children, he at least had the two loving grand children and the great grand children they bore.

I remember at that 2006 Worldcon Art would sleep in our room almost all day long, and I worried a little bit that he would die in his sleep. He would've been 89 at that point, and he lived another eight years. He was still driving up until at least a couple of years ago, when I last saw him at the Portland Corflu in 2013. Typical of the way Corflus work, I didn't really get a chance to talk to him at that one. The last long conversation I had with him was probably at the 2011 Corflu in Sunnyvale, where I helped Kim Huett distribute the collection of Art's old travel fanwriting that Kim had put together. Art was terribly pleased by that collection, and he had some ideas about other collections of his writing, although I confess I suggested Kim was a better man for the projection than I. We sat at the little bar in the Sunnyvale hotel drinking Sierra Nevada Pale Ale, and Art told me story after story about the past.

He was a man of many stories who was always surprising me with new ones, such as the fact that he had invented the first science fiction board game, which was called Interplanetary. (Mike Glyer, in his fine obituary at file770.com, says that LASFS still has a giant Interplanetary board.) It may have been at the 2006 Worldcon (or the 1996 one, also in LA) where Art chewed my ear off about his love of the Frankenstein story in all its incarnations. I believe he was thinking about writing a book about it or something. He also loved to tell tales of his experiences during World War II, when he was a guinea pig at the Climatic Research Lab, where they tested various equipment in conditions of extreme heat or extreme cold. Art thought it was pretty funny that his wartime experience consisted of freezing his ass off in a laboratory.

Well, my memories of Art are pretty much endless. There was the time at the Thai restaurant in Portland when he rubbed his eye after touching a red pepper. There was the time at a sushi restaurant in Anaheim (this was the 1996 Worldcon) when I stayed behind after the rest of our group had left because Art wanted to try the green tea ice cream. There was the time he pitched for his team at the Corflu softball game in 2000, when he would have been 82 years old. He could still run the bases, although, okay, he couldn't run very fast. He was always around, always ready with a friendly smile and a silly old joke. He always had that Santa Claus twinkle in his eye. Or was it a devilish twinkle? There was a little bit of the devil in Art, especially after he'd had a wee bit o' the creature. He was an amazing human being. He lived a good, long life and was active up until almost the end. I feel grateful to have known him and to have shared some time with him on this lonely planet of ours. He has always been the very model of who I want to be when I grow up. 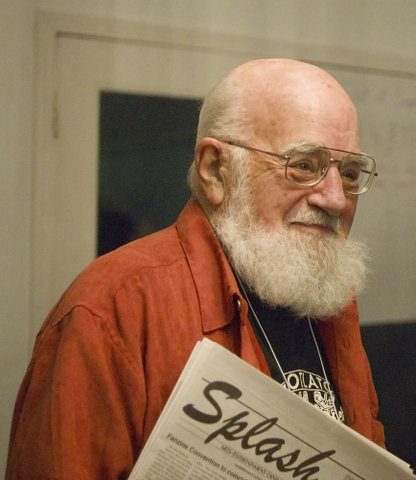 Art at Artcon in 2007 on his 90th birthday (Photo by Luke McGuff)
Tags: fandom, memorial
Subscribe